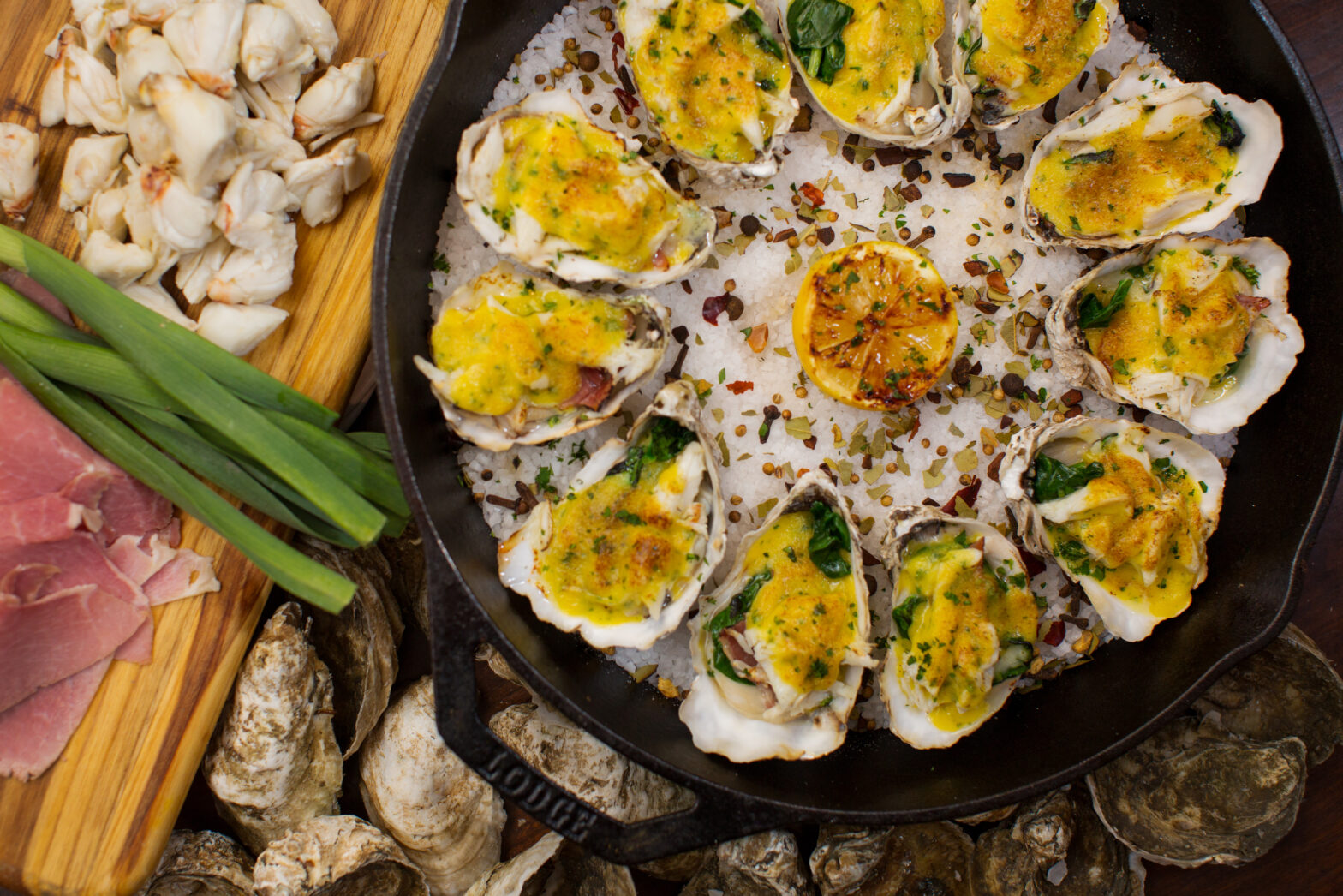 When you’ve cooked for royalty and twice turned down a White House offer to be executive chef, your opinion carries weight.

So, you take note when Hans Schadler praises the quality of fresh seafood on the Middle Peninsula.

“It’s excellent,” the Chef and Restaurateur at Waypoint Seafood and Grill says without hesitation. “I can’t describe it; it’s so fresh — oyster, crab, rockfish, flounder.”

York River Oysters, however, hold a special place. Schadler serves them three different ways: the “Waypoint Way,” with spinach, crab, Virginia ham, aged cheddar and Bearnaise sauce; simply fried with bistro sauce and crisp onions; and on the half shell with shallot mignonette.

The angler behind those oysters is Tommy Leggett, 65, who operates what he calls a boutique business — serving just a handful of customers.

While Schadler spends his days overseeing the kitchen of a five-star restaurant, Leggett is most comfortable in the same sea salt covered overalls and muck boots he wore to harvest and count the oysters he plucked from the river that morning. Waypoint patrons know him as the “oyster guy.” Pre-COVID times, it wasn’t unusual for Leggett to stay for a while after a delivery.

“He’d come in on Thursdays, rugged and not shaved, and hang out with our guests telling stories,” Schadler says. “That’s something that is unique to us.”

Leggett works solo as an aquaculture farmer, purchasing seed no bigger than grains of sand from commercial hatcheries in Virginia and nurturing it to market size. His petite oysters have shuckability combined with an optimum sweet and salty taste that pleases Schadler and a clientele that can taste the difference.

“He grows for quality, not quantity,” says Schadler, whose enthusiasm for foods grown and cultivated locally continues to inspire him nearly 60 years into his illustrious career. His culinary path started when he was a young boy working in his mother’s restaurant in the countryside of Frankfurt, Germany.

Ingredients weren’t plentiful back then; she specialized in comfort food. “We butchered once a year and lived off that meat for the rest of the time,” he says.

As a teen, Schadler followed the apprenticeship model to hone his craft that led to his first major position at the Hotel Bristol in Oslo, Norway. One year in, he was appointed chef of the grill room.

Cooking on a cruise ship followed; he met his wife, a Norwegian native named Liv, on board. He recalls the moment when he first spotted her coming down the stairs. He nudged the pastry chef, “That is someone worth pursuing.”

Married for 51 years, the Schadlers moved to the Virgin Islands when Hans was hired by

Caneel Bay on St. John for Rock Resorts founded by Laurance Rockefeller. He held various roles in that company, moving to Vermont to open its Woodstock Inn & Resort.

Recruited by the Colonial Williamsburg Foundation in 1982, Schadler oversaw 10 restaurants, including the Williamsburg Inn when it hosted the Reagans. Schadler remembers them as gracious guests, appreciative of his rockfish, a staple on Waypoint’s menu when in season. He also coordinated all meal functions for Queen Elizabeth during her visit to the Williamsburg Inn in 2007, an honor that afforded him an audience with Her Majesty.

Above all else, the queen valued preciseness — a lesson learned when he delivered 8 p.m. dinner at 7:55 only to be turned away by the butler. “Meeting her personally was the highlight of the visit,” he says. “We had a very brief but cordial and complimentary conversation.”

Schadler also served Norwegian royalty during their visit to Williamsburg. The king and queen planned to visit local taverns for their meals until they sampled Schadler’s rockfish with fresh lump crabmeat on top and he greeted them in Norwegian — one of three languages he speaks along with English and German (a tad of culinary French).

“That was it!” he says. “They never went back outside to eat. I cooked for them for three days.”

Keeping his family in Williamsburg took precedence over accepting another prestigious job offer, even if that meant turning down the White House. Both daughters live close by; his eldest, Tina Schadler-Phillips, works alongside him as manager at Waypoint.

“One of the highlights of my career was in 1988, when I was twice offered the position at the White House,” he says. “But we didn’t want to separate the family.”

Ten years into turning Waypoint into one of the nation’s premier restaurants — Open Table has awarded it a Top 100 distinction — Schadler, 78, walks through the door every morning with vigor. “I am still learning,” he says, rattling off a list of chefs who he admires, from Herman Rusch to his mother.

“She was a magnificent cook,” he says, confessing he could never match her for baking. “Her pies, cookies and cakes, wonderful cakes.”

At Waypoint, his goal is to feature a menu that combines classic culinary techniques with modern creativity to create an intersection or “waypoint.”

The restaurant touts its fresh ingredients that include greens from local farms and the bounty from the Chesapeake Bay. Its dinner menu includes Classic Wiener Schnitzel with a veal cutlet, red cabbage and lemon caper brown butter sauce and Seared Shrimp & Scallops with stone ground cedar grits and lobster tomato nage.

Schadler didn’t develop his taste for seafood until he was in his 20s. His mother bought eel and trout from the fishmonger on the Fridays they went without meat, but he’d pass. When he arrived in Norway, he discovered how versatile fish could be.

Which brings us back to oysters. York River Oysters, to be specific, sized “from medium to perfect,” in Schadler’s words.

“The Waypoint oyster recipe is near and dear to me. Sometimes people will come to me and say, ‘Why don’t you have a bigger oyster?’ I’ll tell them, ‘I don’t like a bigger oyster.’ These are delicate, they’re versatile. I like Tommy’s oysters. I’m loyal to him. He does things in a very special way.”

The same, too, could be said of the chef.